Riding in India means affirming your belief in reincarnation, liberating yourself from the rigid and unimaginative restrictions of Western rules of the road, and voluntarily submitting to the “might is right” principle. In this article, I would like to familiarize you with ten basic concepts that are essential to your survival on the road in India.

The Indian rules of the road are rooted in the ancient principle of Karma, or the belief that a human’s fate is determined by his or her actions in a previous life. Indian motorists see that as an invitation to drive with courage and passion. On the whole, drivers give their best and display deep trust in their insurance companies. 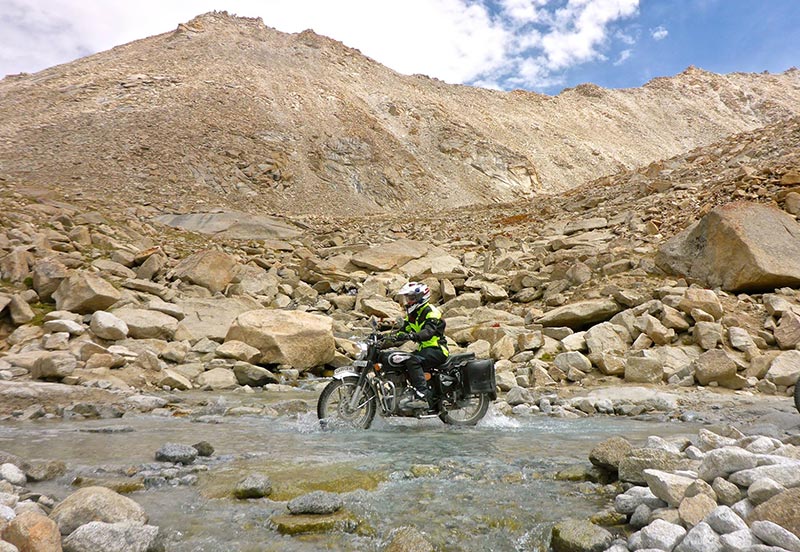 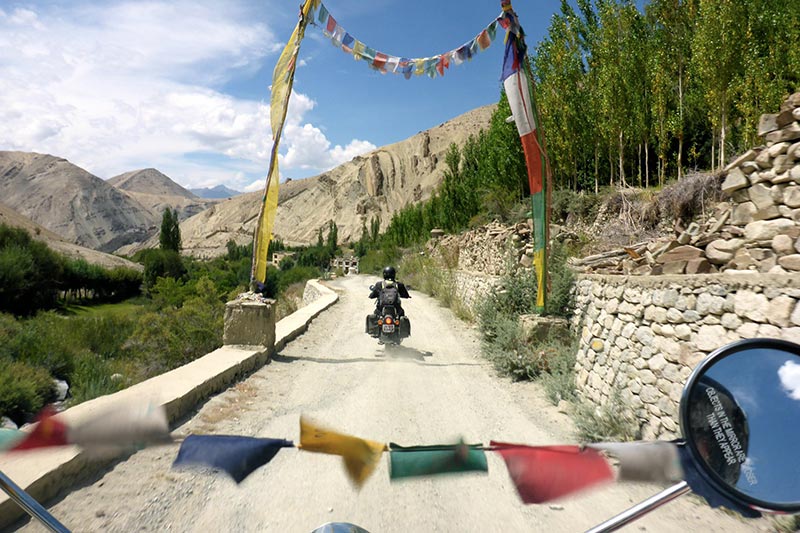 1. The first question you should ask yourself is whether to ride on the left or right-hand side of the road. Actually, it depends. Start at the far left and stay there as long as you still have room to move. Once traffic on the left is hopelessly stuck, move over to the right until that side grinds to a halt as well. Next, dart into any gap that opens up. The necessary moves are not unlike those of a rook on a chess board. Trust your instincts, define your target and open the throttle. Be sure to ignore traffic signs, as they will only distract you and cause unforeseen problems. Most Indian motorists don’t “drive” they home in on their destinations. Always keep your courage up and never appear indecisive. Remember, other motorists are no better off, unless they believe in reincarnation, of course.

2. Never stop for some enlightened soul standing at a pedestrian crossing unless you don’t mind being rear-ended. Pedestrians have learned not to cross the street until a visiting politician’s motorcade has gridlocked the entire city. Anyone so foolish as to step into traffic at any other time is unlikely to be mourned.

3. In India, using the horn is not a sign of protest as in other countries. Indians honk their horns out of joy, sadness, infatuation, frustration, the simple love of its sound, and as a sign of respect for sacred cows ruminating serenely in the middle of busy intersections

4. Night rides are a spine-tingling experience not unlike Russian roulette, but without knowing how many the other road users have “loaded”. Bright streaks of light on the horizon, not unlike the first rays of dawn, usually turn out to be trucks vying to break their personal best times. Your safest option is to dodge into the field next to the road and stay there until the apparition has roared past. Don’t bother flashing your high beam in warning chances are the driver is already quite lit up without your help, his cerebral functions flatlining after downing a bottle of arrack. Truck drivers are the James Bonds of India hey have a license to kill. At times you may encounter an intense, oncoming beam of light about a meter up from the ground. It won’t be a modern superbike, but a one-eyed truck. In most cases, the right-hand light will be broken. It can also be the left-hand one, but try not to get too close to find out you won’t be receiving any posthumous medals for your spirit of inquiry.

5. You may also come across large, brightly lit objects resembling UFOs, festooned in colorful, flashing lights and emitting mysterious sounds. On closer inspection, you’ll discover that it’s actually a bus full of praying and chanting pilgrims. Such busloads of pilgrims travel at hellish speeds because they’re seeking contact to the Almighty. And quite often, they succeed.

6. Autorikshas (tuk-tuks): Borne of a collision between a scooter and a minivan, these three-wheeled vehicles are mainly used as taxis. Autorikshas transport steel girders, propane bottles and passengers amounting to three times the weight and volume of the vehicle on a slow, erratic trajectory. After careful calculations related to suspension geometry and material fatigue factors, school children are layered onto the outside of the vehicles until the outermost ones have no direct contact to the actual vehicle. Finally, their book bags are wedged into the remaining gaps for better stability, and to ensure that the autoriksha doesn’t sustain any significant damage in a collision. Naturally, the outer layer of children only pays half the regular fare. Licenses are optional for autoriksha drivers. Before they are allowed to carry passengers, they must confirm that they have watched the chariot race scene in Ben Hur, however.

7. Indian mopeds look like oil cans on wheels and sound like electric shavers. They can travel around 50 km on a tablespoon of fuel, yet if they were any slower, they would need training wheels. Indian roads only tend to be paved across the middle third of their overall width, and since moped suspensions aren’t suitable for riding on the broad gravel shoulders, their riders tend to hog the middle of the road. Due to their low speed, they generally don’t get out of the way of other vehicles, but tend to ride right under them, being mopped across the asphalt.

8. One-way streets: This special type of road was invented by officials of the Indian ministry for infrastructure to add a bit of excitement to their otherwise dreary working days. The key to these streets is to liberate yourself from the literal definition of “one way” and simply drive through in whichever direction you choose. Defining the term metaphysically, it becomes clear that it is impossible to drive through a street in more than one direction at a time. Travel in any direction you want, but take care not to drive in reverse if there’s any way to avoid it.

9. Buses: Bus drivers are paid by load (X rupees per ton), so passengers tend to hang off of buses like bunches of grapes during rush hour. When encountering an oncoming bus on a bend in the road, you may find that the outer layer of passengers is clutching those further in, who in turn are hanging on to the running boards of the bus. But don’t worry: the severe overload improves the traction of the bus to the point that centrifugal force is no longer an issue. To play it safe, you should nevertheless give buses a berth of at least three passenger lengths.

10. If you still want to ride a motorcycle in India after reading all of the above, then do so between 8:00 pm and 11:00 am in other words, after the policemen have gone home for the day. Those are the hours in which Indian citizens enjoy their constitutionally guaranteed freedom of speed without restrictions.

By keeping these ten points in mind, you will do your part to ensure that India’s traffic fatality figures remain below those of the United States and other countries of comparable size.