NEPALis home to eight of the ten highest mountains on Earth, it is a truly magical country at the top of the world! With its diverse geography, rich heritage, and breathtaking scenery, Nepal offers something special for every visitor. Our Nepal motorcycle tours are your chance to get up close and personal with this spectacular mountain paradise, creating vivid memories as you go. Our tours take in locations including Mustang, Kagbeni, Lo Manthang, Muktinath, Begnas Lake, Pokhara, and the capital, Kathmandu, all while affording views of the highest mountain range on Earth. We’ll snake through the electrifying Himalayan mountain roads, overcoming varied terrain and passing Hindu and Buddhist temples en route. With our experienced guides at your side, our motorcycles tours of Nepal are the ideal way to experience the country’s hidden delights. 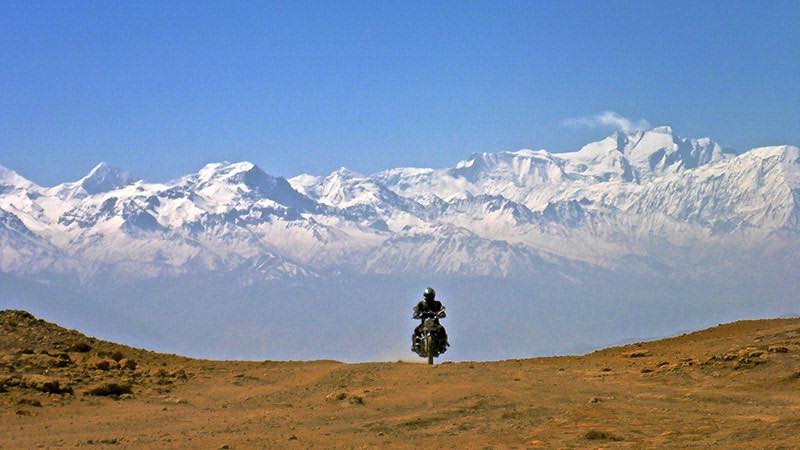 North of the Annapurna Massif, tucked away between Tibet and Nepal, lies Mustang Valley – a remote, mystical region with wild mountain roads. It offers you the ride of your life: the road to Mustang will get your adrenaline flowing with its rough tracks, dizzying passes and rugged gorges! The former kingdom was closed to outsiders until 1992, but now you can look forward to a Mustang motorcycle tour in Nepal that you’ll never forget.

Since 1998, Classic Bike Adventure Tours has been using dependable classic Royal Enfield motorcycles to escort adventurous travelers on life-changing motorbike tours of Nepal. As of 2019, we’ve completed 60 tours in Nepal alone, with a grand total of 880 bikers from 15 countries all around the world.

The Culture of Nepal

Nepal’s culture, customs, history, and religions are as fascinating as they are varied. The Nepali people are of varied backgrounds and ethnicities – most are descended from three main waves of migrants, from northern Burma/Tibet, from India, and from China.

Nepali is the main language, although a range of minority languages are also spoken. Over 80% of Nepal’s people are Hindu; the highest proportion of Hindus in any country on Earth. Buddhism is also practiced by just under 10% of the population. The two religions exist peacefully side by side, and some blending of the two faiths has occurred over many centuries. Both Hinduism and Buddhism have made a deep mark on the national landscape, and temples linked to both religions are among Nepal’s best attractions.

What to know about Nepal

Unleash the explorer in you and embark on an incredible motorcycle journey throughout Nepal.

No motorcycle tour of Nepal would be complete without taking the time to sample the country’s cuisine. The Nepali diet has a heritage that’s linked to the ethnic heritage of the people, with influences from neighboring countries and cultures.

Lentils, rice, and vegetables are staple foods in Nepal – the staple dish dal bhat tarkari includes all three (the name is Nepali for the three ingredients). If the dish sounds a little dull for your taste buds, then fear not – it’s enlivened by a rich variety of spices, for maximum flavor. In the high mountain areas, where rice cannot be grown, the Nepali people use other grains in its place – such as buckwheat, barley, or maize.

Why are the daily stages relatively short?

Although the daily stages are between 50 and 200 kilometers, they are by no means short or quick to master. Most of the stages are full riding days, due to the road conditions and the visiting program. Riding in Nepal is challenging and our daily distances are always based on the routes and the road surface. One thing is guaranteed: it won’t be boring.

A travel day normally begins at 8 am with breakfast. Around 9 am, after a short briefing by the road captain, it’s time for the day’s riding, the mileage of which can vary quite a bit. Plenty of time will be available for lunch and coffee breaks, of course. Depending on the day’s mileage, we’ll reach the destination hotel between 3 and 4 pm.
Since our tours vary considerably, we may also hit the road at 8 am on high-mileage days – which is also nice, because then we have the whole day ahead of us.

What are the specs of the bikes?

Our Enfields were manufactured from 2013 to 2017 and are well-maintained. Naturally, some of them bear the minor battle scars typical of touring motorcycles. Technically, they are all in top shape and perfectly suited to the planned tours. They’re tremendous fun to ride, and their handling is safe and predictable after a brief familiarization period. Our average speeds on the tour range from 40 to 60 kph, depending on the road conditions and traffic.

How much is the deposit for the bike?

Riders must make a deposit of USD/EUR 500.00 in cash for their bikes. The deposit will be refunded when the bike is returned in good condition. The deposit corresponds to the comprehensive insurance deductible for damage to the rented bike and damage or injuries to third parties caused by the rider.
(The deductible is payable in such cases!)

Important note: The deductible also applies to damage or injury to third parties. In practice, the rider is initially liable for the full damages. The costs are later refunded by the insurance company, minus the deductible.

Where can I stow my bags?

Your baggage will be carried by the support vehicle. Please don’t pack too much – remember: less is more. From time to time, we’ll have to carry our baggage over short distances to the hotel. Baggage is not insured, so please be sure to purchase your own baggage insurance for the trip if necessary. Your personal items for the day are best kept in the saddlebags or your daypack. Tank bags – including magnetic ones – can be used on the Enfields, but we don’t provide them.

Will I need maps?

Simple street maps are often available locally. The best road maps are available from the German publishers Reise Know How and Nelles. These are only available in specialized bookstores or online.

Do I need a driving license?

What do I need in the way of documents?

What kind of bikes will we ride?

Our European tour guides are skilled motorcyclists and inveterate travelers who love India. They’re resilient in the face of stress and know the history and culture of the regions they cover. Our Indian mechanics are experienced Enfield specialists who all speak English and are happy to help with any technical problem, great or small.
A stand-in rider is always available. More information on our travel concept is available here.

How big are the groups? What’s the minimum number of participants?

Groups generally consist of 8 to 14 riders and 2 to 6 passengers. The minimum number of participants is 6 riders.

Do pillion passengers have a guaranteed seat in the support vehicle?

Yes, all passengers have a guaranteed seat. In bad weather or challenging riding conditions, they can switch to the support vehicle at any time – and back to the bike when conditions improve.

What should I keep in mind when riding with a passenger?

Riding two-up is almost always possible. In difficult terrain or on rough tracks, every passenger has a guaranteed seat in the support vehicle to keep things relaxed for both rider and pillion.

Do I need travel insurance and travel health insurance?

We always recommend that you take out travel insurance to cover costs incurred if you need to cancel the trip due to illness or other reasons. When shopping for travel health insurance, make sure the policy covers the potentially high cost of medical evacuation to your home country. Both forms of insurance can save you a lot of money in an emergency and we recommend them unreservedly. In many countries, your national motoring organization can provide the coverage you need.

What do I need to bring along for a motorcycle tour?

You will definitely want to bring your riding suit with protectors and a helmet. You will also need motorcycle boots or lighter riding shoes and gloves. While your gear should be breathable in hot climates, you need to be ready for anything at high altitudes and in the Himalayas. We recommend winter gloves, warm socks, liners for jackets and trousers, a scarf and face protection. Rain gear is a good idea if your riding suit is not waterproof.
Please note that we do not hire out clothing. We believe that your own riding gear will fit best and thus give you the best protection. If you forget anything, we’ll find a solution, however. We often have spare gear with us, or we can point you in the direction of a shop.